The Finance Minister Grant Robertson has said this year’s Budget will be all about health. We’ve written a pre-Budget opinion piece published in the Sunday Star Times and Stuff which looks at what’s needed to correct the many years of underinvestment.

Barely a day goes by without a media report of someone somewhere in New Zealand being let down by the public health system.

It seems to have got to the point of stating the obvious. The health system is in a hole, but not because of the Covid pandemic. Before Covid, public hospital bed occupancy rates were hitting record levels and wards were operating at levels exceeding clinical safety standards. Services were beset with long-standing staff shortages, burnout, dilapidated buildings and equipment that in many cases were well passed their use-by date.

An estimated 450,000 people needing hospital treatment were either on waiting lists or shut out altogether by being deemed “low-priority”. On top of that, an estimated 1.2 million adults are reported to have one or more types of unmet need for primary care. No doubt some of them end up in hospital as a result. We have relatively poor access to publicly funded medicines and relatively poor cancer survival rates when matched with other comparable countries, and the gap on cancer survival is growing.

Before Covid, there was a palpable sense of dread among doctors of what was in store when winter arrived, when hospitals are at their busiest. Now, as we approach winter, they and their health team colleagues are needing to gear up for influenza and measles viruses, ongoing Covid cases, and a huge backlog of surgery and cancelled specialist appointments due to the pandemic.

So, Covid aside, how did we get to be in such a hole, and is this year’s Budget going to dig us out or dig us further in?

Years of health system under-funding have been acknowledged by the current Government but while there are patches of genuine improvement over recent budgets, overall, there has been little sign of significant progress to seeing most health services move beyond mere day-to-day survival.

With Finance Minister Grant Robertson announcing a $6 billion Budget operating allowance for 2022/23 – the largest since the 2008 Global Financial Crisis – and with health system funding being a priority, big numbers can be expected for Vote Health. Current indicators suggest it could see more than $2 billion of new funding for the next financial year. But we have seen from previous Budgets that big numbers can very easily evaporate when put under a spotlight because it costs a lot simply to maintain the current level of services –more so than ever this year. Additional funding is needed to cover costs such as inflation, wage growth, pay equity agreements, demographic changes, lock-down service backlogs, Budget pre-commitments and addressing base funding shortfalls indicated by a decade of DHB deficits.

That is certainly going to hit more than $2 billion. Kick-starting an urgently needed multi-year strategy to address New Zealand’s shameful unmet health need which is a vital part of achieving the Government’s goal of health equity, along with addressing long-standing staff shortages across the board, requires much more. For that to happen, rather than being a “one off”, as Grant Robertson has indicated, the Government will need to repeat this year’s Budget operating allowance for at least another year.

The current political debate about whether the size of this year’s operating allowance is justifiable needs to take a much broader social and economic perspective which recognises the overwhelming evidence that spending in health and other social services is an investment resulting in substantial social and economic gains.

The apparent obsession with making government budget surpluses – a trait our finance ministers seem to share with Australia’s – also badly needs this broader social perspective. As one finance commentator put it, we have heard it for so long now, it has become ingrained into the collective psyche. Surplus good, deficit bad. Both sides of politics have adopted it, almost as a mantra. But a sustained surplus can be every bit as debilitating to an economy as ongoing deficits.

The hole that we are in today, and the huge price we need to pay to get out of it, is due in large part to decades of under-investment. A simple example is today’s $14 billion bill to restore our dilapidated hospital buildings due to the penny-pinching of previous governments. In fact, the recently release New Zealand infrastructure strategy report has stark lessons for health and social investment and the consequences for neglecting it.

The report reveals the country’s infrastructure ­­ – water and power networks, roads, rail, and buildings, etc ­– has deteriorated to the point where over $31 billion a year would need to be spent for the next 30 years to put it right.

As Grant Robertson put it, “As a country, over decades we have simply not invested enough, not planned far enough ahead or with sufficient coordination or efficiency to meet our infrastructure needs.”

Swap “infrastructure” with “health” and you have a good summary of why our health services are in such a parlous state.

Much is expected from the restructuring of health system this year, which is necessary to make headway on achieving health equity and in the long run reducing health costs.

But restructuring alone will not be enough to deal with our long-standing health and social needs. As the Health and Disability System Review put it: “No system can operate effectively without adequate funding.”

Whether or not the Government has learned from the irreparable damage that can be caused by under-investment is about to be tested.

As published in the Sunday Star Times and Stuff 15 May, 2022 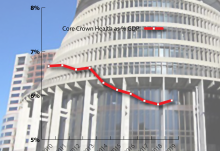 Workforce: The make or break of the health reform

Heroic efforts in understaffed norm: How many full-time equivalents do we need, exactly?

Staffing shortages elephant in the room in patient backlog plan

39. Professional and Patient Responsibility and Accountability